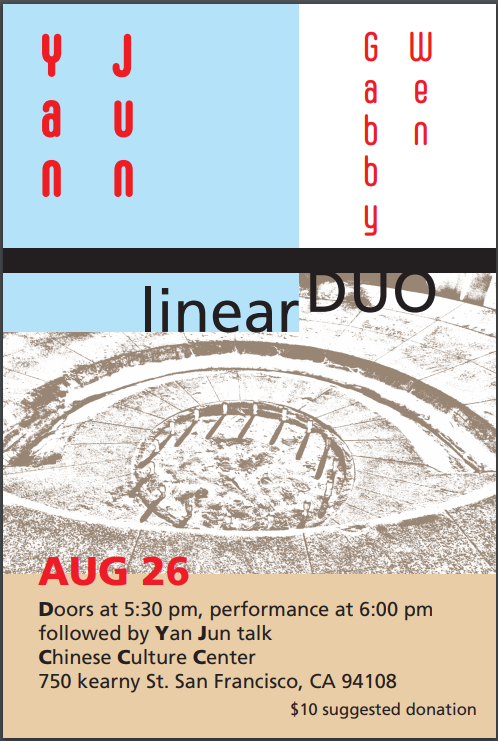 Performing in collaboration with Bay Area artist Gabby Wen (文怡), Yan Jun will also give a talk providing insight into current experimental sound and music - or “no music”- happening in China of which he is a crucial contributor as performer, organizer and publisher.

Yan Jun is a musician and poet based in Beijing.

He is a member of groups FEN and Tea Rockers Quintet and founder of the guerrilla label Sub Jam.

Gabby Wen is an improviser, composer, sound/performance artist, who often employs improvisation, synthesis and movement. Born in Taishan, Guangdong, raised in Shenzhen and the East Bay, she is currently based in San Francisco, CA. She embraces the stochastic and disordered nature of the reality, the obsolete, and the dysfunctional, but equally appreciates the peace and the unwavering.

23five Incorporated is a Bay Area nonprofit organization dedicated to the development and increased awareness of sound works in the public arena, and to the support and education of artists working with and discussing the medium of sound.

Founded in 1965, Chinese Culture Foundation opened its primary program site, Chinese Culture Center in 1973. The mission of the CCC is dedicated to elevating underserved communities and giving voice to equality through education and contemporary art.

Launched in 2015, Valleyrain Reading Club is a non-profit organization founded in March, 2015 and based in San Francisco Bay Area. Our mission is to improve spiritual and cultural level of Chinese communities in US, mainly in the Bay Area. We are trying to build a spiritual home for all Chinese residence in the United States who are keen to reading, freedom and learning new things.